From bus shelters to lamp cowls – design and the city

During the final year of the first term of the Arts Council and the first year of its successor, a number of interesting interventions were made.

March 1956:  It was decided that a letter should be sent by the Director to the General Manager of Aer Lingus (Ireland’s national airline) informing him confidentially that the Council did not approve of the recently published Aer Lingus poster of Dublin by Dutch graphic artist Guus Melai as it did not consider it to be of artistic merit.  The General Manager of Aer Lingus thanked the Arts Council for its views but said

‘In commercial publicity there must be many compromises with sheer artistic merit’.

October 1956:  It was decided that representations should be made to the Dublin City Manager protesting against the substitution of modern cowls on the lamps on O’Connell Bridge instead of the original lantern cowls, which, in the opinion of the Council, were in keeping with the classical character of the bridge.

January 1957: The Council authorised the Director to pursue a policy of protesting privately or publicly against unsightly public buildings, erections, hoardings or street furniture.

March 1957:  It was decided to inform Córas Iompair Éireann (CIÉ – the Irish national transport authority) that the Council ‘deplores’ the erection of bus passenger shelters on Aston Quay as one of the ‘greatest assets to Dublin is the views of the river’.

Letter from CIE to the Arts Council (1 of 2 pages)

Letter from the Arts Council to CIE with Council Minute 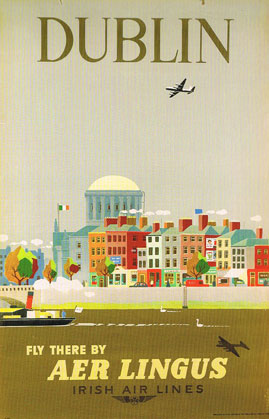 Dr. Bodkin said that he disapproved strongly of this poster [Aer Lingus poster by Guus Melai], that the colouring was bad and broken up and that it should be condemned by the Council.

We are quite sure that you are just as eager as we are, and as C.I.E. is, to have these neolithic remains excavated from their present site adjacent to O'Connell Bridge, which latter is thought by many people to be one of the finest specimens in Europe of a bridge built in the Classical style. 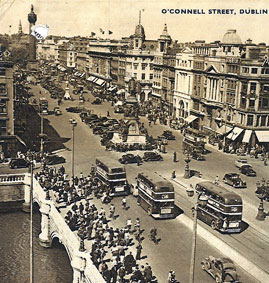