Gerald Dillon wrote from London saying ‘painting is my life’ but that, to enable him to exist, he was reduced to doing odd jobs including gardening and stoking boilers. He asked for finance to enable him to return to Ireland for six months as ‘Ireland is my greatest inspiration’.

George Campbell wrote from Dublin to say he was on his way to London as he wished ‘to study the whole range of modern painting’.  He said he found it impossible to live by his painting and asked for financial support.

The Arts Council had to refuse both requests as it was not empowered to give ex-gratia payments.

However, P.J. Little, Director of the Council wrote ‘Dear Freddy’ to the Irish Ambassador in London, Frederick H. Boland, asking if anything could be done in London as:

The plight of the young artists seems to be pretty severe at present – quite a number of them have been forced to take up jobs as they are unable to earn a living at painting.

It appears that the Ambassador arranged a joint exhibition for the artists at the Irish Club in London which was very successful.

Letter (handwritten) from George Campbell to the Arts Council (page 2)

Letter (handwritten) from Gerard Dillon to the Arts Council

Letter from the Arts Council to George Campbell

Letter from the Arts Council to Gerard Dillon

Letter from the Arts Council to His Excellency F.H. Boland, Irish Ambassador, London (page 1 of 2)

Letter from His Excellency F.H. Boland, Irish Ambassador, London to the Arts Council 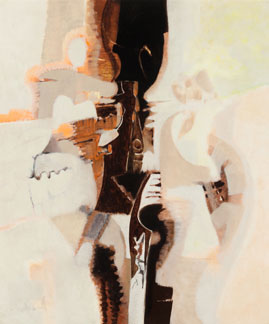 Autumnal Complex No.2, (oil on board) - George Campbell, 1975, Collection of the Arts Council/An Chomhairle Ealaíon. 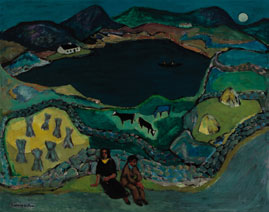 The Black Lake, (oil on board) - Gerard Dillon, c. 1940, Collection of the Arts Council/An Chomhairle Ealaíon.

I now (without any private means whatsoever) find it impossible to live by my painting and would truly welcome the Support of the Arts Council.

Painting is life to me. Ireland is my greatest inspiration so if you could grant me some financial help to come back to Ireland even for six months I'd be very pleased.