‘To bring the arts to the people’ – halls in rural areas

From an early stage, the Arts Council was committed to a long-term scheme of subsidising the building of halls in rural areas. This was the result of representation from its drama panel to ensure that the minimum stage requirements for dramatic performances would be taken into account.

In 1952 the Arts Council approached Forás Eireann, (established in 1949 as a consultative and advisory body to rural organisations) who were the administrators of grants under the Carnegie Trust’s Village Hall Scheme and had succeeded in initiating the building of twelve halls. By 1952 funds were near exhaustion and the Arts Council was ready to continue the work started by the Carnegie Trust. Under a new scheme, grants would be given to halls on condition that they would have proper facilities for the production of music and drama and, wherever possible, the holding of exhibitions. In the process, the Arts Council would cooperate with Forás Eireann who had acquired extensive experience in the building of halls and their associated difficulties.

This initiative led to a memorandum which was submitted to the Government during August 1952. In this memo, the Arts Council stated that

its primary function was to bring the arts to the people and that outside the cities of Dublin and Cork and to a small extent Waterford, Galway and Limerick, the facilities for bringing the arts to the people were negligible because of the complete absence of buildings in which dramatic performances or concerts can be given or in which exhibitions of any kind can be held. There were only about eight or nine theatres outside of Dublin in which professional companies could produce dramatic performances or in which worthwhile concerts could be held.

With additional funds of £30,000 per annum to implement the scheme, it ‘would mean that say at the end of ten years, 300 halls would be built in rural areas which apart from anything else would greatly facilitate the carrying out of the intentions of the Arts Act, 1951’.

The proposal was dismissed.

With no additional funds, the Arts Council remained committed but the scheme operated on a more modest scale. On the 4 November 1952, a grant of £500 was awarded retrospectively to Knockatallan hall, County Monaghan, towards the cost of building a hall. The next two grants were awarded to Askeaton hall, County Limerick and Rath hall, Birr (£250 each) towards the provision of stage equipment and lighting. Both grants were subject to Council conditions which were based on an architect assessment.

Twenty-three halls received financial assistance during the 1950s. In 1960, the Council decided to only give grants for stage-lighting. This followed an inspection by the Secretary during which the managers (parish priests) admitted that the halls were not being used for dramatic or musical performances at all, but solely as dance venues.

From 1960 to 1973, 43 grants were made for the purpose of installing stage-lighting in halls used for dramatic purposes. Expenditure on halls from the Council’s establishment until 31 March 1973 amounted to £23,600 or 4% of all arts expenditure.

‘To bring the arts to the people’ - memorandum submitted to the government by an Chomhairle Ealaíon, 8 August 1952.

Letter from the Arts Council to the Department of an Taoiseach

Memorandum from the Arts Council to Government: Halls in rural areas (page 1 of 2)

Letter from Department of an Taoiseach to the Arts Council 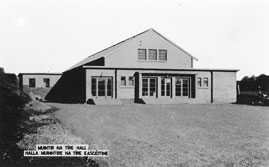