The acquisition of premises for cultural activities was seen as fundamental for the future success of the Arts Council in implementing the Arts Act. Efforts to secure such premises in Dublin were to continue unabated throughout the fifties.

Negotiations to take possession of the Kildare Street Club, built by Philip Cockburn in the mid 1890s, started in January 1954. In the context of a general election, active representations to Government Departments failed to attract Cabinet support and by late April the project was off the agenda.

The unused College Green Post Office was identified as suitable premises the following year and representations were made to the Secretary of the Department of Post and Telegraphs. However, the Department’s imminent plans to relocate staff from ‘the congested sections in the GPO’ to the College Green site meant this was no longer feasible option.

Later that year, the premises at number 44, St Stephen’s Green were considered by the Council as ‘extremely favourable’.  However, the architects regarded the proposal as an uneconomical one with very large alterations and reconstruction needed to make the premises suitable. The project was abandoned.

In March 1956, an alternative proposal suggesting the acquisition of numbers 44–45, St Stephen’s Green and 19 Hume Street was submitted to the Taoiseach. As ‘a complete scheme of demolition and re-construction were necessary’, the Office of Public Works felt they would be unable to support the proposals to acquire these properties.

While it was hoped that the Council would eventually acquire the basement from the Adoption Board at 45, St Stephen’s Green, no other opportunities arose until June 1958 when the Director and Secretary visited 70 Merrion Square (the former homer of writer Joseph Sheridan Le Fanu). Four rooms, two on the ground floor and two on the first floor, as well as the basement, were seen as ‘exactly the kind of establishment’ the Council urgently needed. Negotiations got underway in September and concluded in January 1959. With the consent of the Pembroke Estate to the structural alterations and a lease signed on the 15 January for an annual rent of £350, the work on the renovation was allowed to go ahead. On 27 and 28 January 1959, in connection with the necessary installation of lighting in the Council’s new exhibition hall, the Office of Public Works architect was sent to London to inspect the lighting system in the exhibition hall of the British Arts Council and the Design Research Centre.

While it appears that the renovation and decoration works were still ongoing, the transfer of Council’s premises from 45 St Stephen’s Green to 70 Merrion Square took place on the 27 July 1959.

70 Merrion Square has been the location of the Arts Council since that date.

An exhibition of Modern English Silver was the first show to be mounted in the Council’s new exhibition hall. The opening took place on the 27 October 1959.

Invitation to Exhibition of Modern British Silver at Dublin 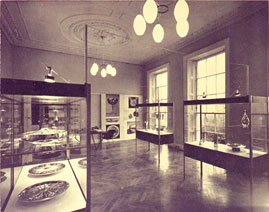 It is disappointing to find that the Council have not yet managed to acquire premises suitable for the proper discharge of its functions. The two rooms on St Stephen’s Green, though central are mean in appearance and inadequate in space. The office in which Dr. O’Sullivan and his secretary work, cluttered as it is with all sorts of paraphernalia – spades, shovels, packing cases, files and so forth – must create a very bad impression upon visitors coming there to seek the Council’s advice or assistance.