Irish Industrial Development – a mural for the International Labour Office

On the 8 August 1957, Ms Thekla Beere, Assistant Secretary of the Department of Industry and Commerce, phoned the Arts Council on behalf of the Minister seeking advice about a suitable artist to execute a mural, representative of Ireland, for the International Labour Office (ILO) in Geneva.

The request for advice was forwarded to Dr Thomas Bodkin, the official Arts Council adviser. In his response, Dr  Bodkin suggested the  artist Seán Keating as the man best qualified for the work: ‘He has certainly made a success of the 14 large Stations in the Chapel at Clongowes Wood College. Failing him, Mr Charles Lamb, R.H.A. might discharge the commission efficiently’. He also suggested that ‘the Council might consider the possibility of advising the Department to institute a competition. Personally I would prefer to select some artist straight away and commission him to do the work’.

Dr Bodkin’s recommendation was placed before the Council at their October meeting and the following decision was communicated to the Minister:

the Council does not care to make a decision at this stage as to the most suitable artist, but suggests that the Minister should permit an Chomhairle Ealaíon to institute a competition for a suitable mural.

The letter continued with details of the competition.

The Minister dismissed the proposal to hold a competition and requested the names of one or two Irish artists whose work would be suitable for a commission of this kind.

The names of Seán Keating and Charles Lamb were eventually communicated to the Minister by the Director Seán Ó’Faolain who, on his own initiative, also added another artist: ‘In suggesting Mr Louis le Brocquy’s name I have in mind not Mr le Brocquy’s paintings so much as his extremely skilful designs for tapestries’. The letter concluded that the Council would be only too happy to give any further assistance by advising on the suitability of the proposed designs from an artistic point of view.

The correspondence was acknowledged on 22 October 1957 and no further communication emerged until the 3 February 1959 when arrangements were made to go to the Department to view a ‘cartoon’ of the mural submitted by Seán Keating.

Seán Ó’Faoláin and Michael Scott fulfilled this task and in a letter to the Minister on the 5 February 1959  (see letter no. 3 in archive material) stated:

The result has been something in the nature of a piece of poster work of a very high class nature intended for propaganda such as has been in the past frequently produced as Soviet art, and is now completely discredited even as good propaganda.

The mural entitled Irish Industrial Development was formally presented to the ILO on the 19 June 1961 by Jack Lynch, Minister of Industry and Commerce, and is located in the main stairway of the Centre William Rappard, the current home of the World Trade Organisation, in Geneva, Switzerland.

Letter from Thekla Beere, Department of Industry and Commerce to the Arts Council 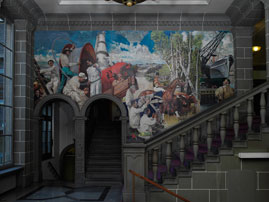 The kind of people who would alone be fitted to pass judgement on this cartoon are some firm of high pressure publicity agents. 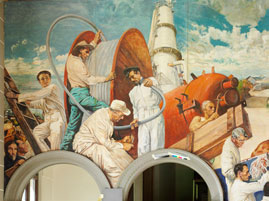 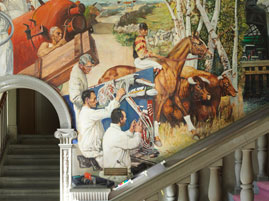 Irish Industrial Developement - View from the side staircase leading up to the mural. Photo: Pierre-Yves Dhinaut. © WTO.