The restoration of the Royal Hospital Kilmainham

The condition of the Royal Hospital Kilmainham was of urgent concern to the Arts Council. The minutes of an April 1955 meeting – twenty five years before restoration began – record

‘it was decided that a Resolution should be sent to the Taoiseach recommending that reconditioning of the Royal Hospital for use as a National Folk Museum be commenced and stating that the Council was anxious that a deputation should wait on the Taoiseach in connection with this matter’.

Following Irish Independence in 1921, the building was administered from London until 1928 when the few remaining ex-soldiers were transferred to Chelsea.

Apart from two years in the 1930s, when it served as Garda headquarters while the Garda Depot in Phoenix Park was being renovated, the Royal Hospital Kilmainham lay idle and deteriorating for over 40 years. A visit by the newly-elected Taoiseach Jack Lynch in 1977 led to the initiation of a massive restoration scheme costing £21m and its eventual re-opening in 1984.

Letter to the Arts Council from Council Member A Chester Beatty

Letter from Department of the Taoiseach to Arts Council 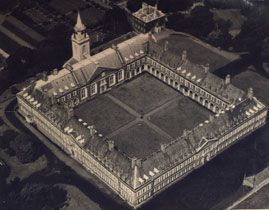 ... that nothing should stand in the way of restoring this beautiful piece as a National Monument for the country’s benefit.