There is no doubt that without the dedication of John Ruddock and his late wife Doreen, the Irish music scene – and especially chamber music – over the past 40 years in Ireland would have been less stimulating. The story of the Limerick Music Association (LMA) began in September 1967 when John Ruddock wrote to the Arts Council to say:

Our association has been formed to improve the hitherto very poor musical situation in Limerick and district.

In October, the Council gave a guarantee against loss of £502 for the Winter Season 1967–68.  A total of £481 was called upon for the production of five concerts.

The Arts Council continued to be very supportive and from 1967 to 1970 granted a total of £3,749 plus £1,000 toward the purchase of a concert grand piano costing £2,500. Unfortunately the piano was held up for some time at Waterford Port until the LMA paid an additional £284 in respect of wholesale and turnover taxes. This led to the cancellation of one concert but also resulted in the the Council making representations to the Office of the Revenue Commissioners and sending a deputation to see the Taoiseach on the whole matter of tax on musical instruments.

I cannot emphasise too strongly how discouraging it is to a body such as the Limerick Music Association to find that, having striven so hard to raise the necessary money, a considerable portion of the subscription must be spent on excise duty. In addition, my Council would be most disturbed to learn that part of the moneys voted to them by Dáil Éireann to spend in promoting the arts could return to the Exchequer.

(Meryvn Wall, letter to the Office of the Revenue Commissioners,  2 November 1970)

When John Ruddock retired from teaching and moved to Dublin, he maintained the Limerick Music Association until 2004, giving concerts in Dublin, Limerick and elsewhere. The association then became the Music Lovers Association which still stages concerts organised by John.

In January 2009, the Arts Council and the National Concert Hall, jointly presented a musical celebration of the ‘Life and Work of John and the late Doreen Ruddock’, featuring many leading artists who had performed with the Limerick Music Association.

Letter on Villiers-headed paper from John Ruddock, Headmaster of Villiers School Limerick, and Secretary and Founder of the Limerick Music Association, to Mervyn Wall, Secretary of the Arts Council

Letter from Mervyn Wall, Secretary of the Arts Council to Secretary, Office of the Revenue Commissioners

Letter from the Office of the Revenue Commisioners acknowledging receipt of the Arts Council's letter of 2 November 1970. 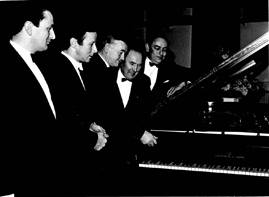 I feel than any money invested in a good piano would be a wonderful investment for the future of music in our City and I hope the Council will consider our request most sympathetically.