To encourage the purchase of paintings by Irish artists

In 1954, in order to fulfil its functions under the Arts Act of promoting the knowledge and practice of the arts in Ireland, the Arts Council started a scheme for the purchase of paintings by Irish living artists. The joint purchase scheme was open to local authorities (including the Vocation Educational Committee and public libraries) and the Council would pay half the cost, up to a maximum of £50, in respect of each approved picture. The idea behind the scheme was to give some small assistance to Irish artists and to bring the public into closer contact with their work as paintings purchased under the scheme had to be displayed ‘in those parts’ of the authorities’ premises ordinarily frequented by the public.

Each year, a sub-committee of three Council members was appointed to select paintings from the three main exhibitions held in Dublin: the Royal Hibernian Academy (April–June); the Irish Exhibition of Living Art (August–September) and the Oireachtas exhibitions (October–November). A list of paintings was then sent to each of the 75 local authorities and the selection was made on the basis of available funds. The scheme was temporarily abandoned in 1959 due to a lack of interest as only 11 local authorities availed of the scheme. Sixty-one works of art were purchased between 1954 and 1959.

While the scheme attracted some criticism, it was a significant one in the history of the Council. The origin of the Council’s own permanent art collection http://artscouncil.emuseum.com/ is derived from the scheme. This collection is a public record of contemporary visual art produced in Ireland since the 1960s.

The scope of the joint purchase scheme was subsequently widened to include hotels across the country and later to schools, semi-state bodies, hospitals and universities.

‘To encourage the purchase of paintings by Irish artists’ – source: Director P.J. Little, 2 February 1954, letter to the Taoiseach

Copy of a letter from the P.J. Little, Director, Arts Council to the Taoiseach

Letter from Arts Council to all City and County Managers

Letter from Corporation of Dun Laoghaire to Arts Council

Letter from Corporation of Waterford to Arts Council 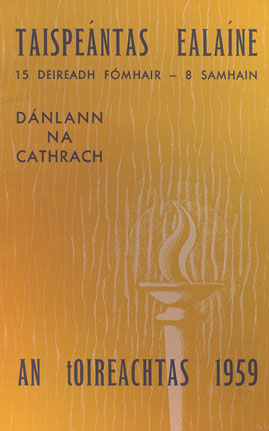 ... all we get now is silly letters and resolutions that County So-and-So might consider contributing part of the purchase of a picture provided it was by a native of the County, but they will certainly not waste the taxpayers’ money on the work of foreigners from neighbouring counties.