The Arts Council under the first Arts Act 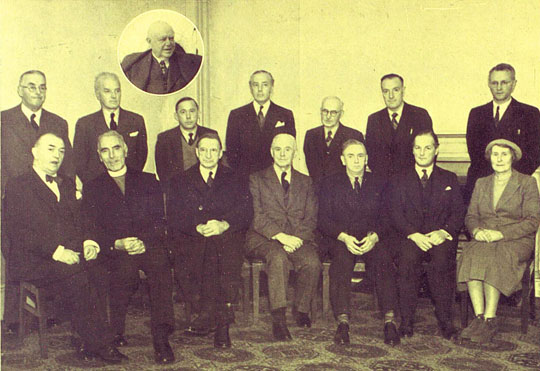 Pictured at the Arts Council meeting of 25 January 1952 are:

In 1948 the Irish inter-party government commissioned Dr Thomas Bodkin, a former Director of the National Gallery of Ireland and at the time Director of the Barber Institute in Birmingham, to investigate the state of the arts in the twenty-six counties of Ireland and report to Government. Dr Bodkin’s report indicated that the arts were suffering from neglect, so the Taoiseach, Mr John A Costello, TD introduced into Dáil Éireann the Bill which was passed into law as the Arts Act, 1951, setting up an arts council to be called An Chomhairle Ealaíon. The functions of this new statutory body were to stimulate public interest in the arts, to promote their knowledge, appreciation and practice, and to assist in improving artistic standards. The arts which the Council had the power to promote initially were of ‘painting, sculpture, architecture, music, drama, literature, design in industry, the fine art and applied arts generally.’

It is a matter of great gratification that we have, in this period of strife and stress, such a unanimous and, I may say, enthusiastic support for a Bill dealing with matters of the spirit, the fine arts. [...] For me, it is the fulfilment of a personal ambition going back over many years. I have no doubt that the way in which this Bill has been received both in the Dáil and in the Seanad—reflecting as it does unanimous opinions of all Parties, and therefore the unanimous opinion of the Irish people, that this art council should be set up and set to work immediately—will be a source of great strength and encouragement to the director of the council when it is set up.

The Arts Council (An Chomhairle Ealaíon) consisted of a board and staff members.

Under the terms of the Arts Act, 1951, the appointment of the Director was made by the President on the 4 December 1951 and the appointment of ordinary members by the Government took place on the same date. On 2 January 1952 the Council took up offices at 45 St Stephen’s Green, Dublin 2. The first formal meeting of members took place on the 10 January 1952. Its first full meeting (with co-opted members) took place on 25 January 1952 and was attended by Taoiseach Eamon de Valera TD and John A Costello SC TD, leader of the Opposition. Both men addressed the Council and wished members success in their work.

In terms of the Arts Council’s work, seven core activities derived from the Arts Act, 1951: 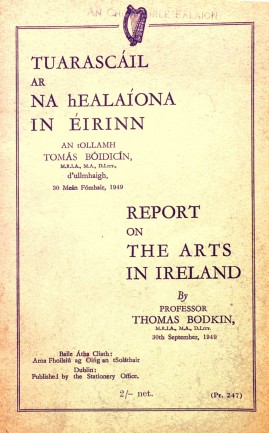