On the 14 of April 1955, the Secretary of the Haverty Trust, Joan Campbell applied to the Arts Council for a grant of £20 to assist the Trust in the holding of their forthcoming fifth quinquennial exhibition at the Municipal Gallery.

The Haverty Trust was established following the death of the artist Thomas Haverty who left a large sum of money for the purchase of paintings by Irish artists which could be displayed in galleries or public institutions in Ireland. Under the terms of the Trust, the expenses of an exhibition could not exceed £20.

The application was put before the Council at their April monthly meeting and financial assistance was granted by way of guarantee against loss.

The Council decided to guarantee up to a maximum of £30 any losses in excess of £20, i.e., up to a total loss of £50, the first £20 of which is being borne from the funds of the Haverty Trust, incurred in this exhibition.

In the ensuing discussion, the Secretary William O’Sullivan suggested sending the show to various centres throughout Ireland after the Dublin exhibition. The Council agreed in principle and the Secretary subsequently approached the Haverty trustees with the idea.

The trustees were agreeable to lend the pictures for six months or so and the offer was formally accepted by Council members during the June monthly meeting where the Secretary was instructed to take charge of the paintings after the Dublin show and to make provision for storing them until the autumn.

At the Council meeting in September: £200 was allocated towards the cost of this initiative; the art critic James White was asked to compile a catalogue for the exhibition at a fee of 10 guineas and The Sign of the Three Candles printing press was paid 47 pounds, 15 shilling and 6 pence to print 3,000 catalogues to be sold at 6d per copy, despite the Secretary noting:

‘We are not yet certain whether we would want further copies above the 3,000…. We have as yet no experience as to what the demand for these catalogues is likely to be in the different centres’.

Council accounts for that period show that 1,432 catalogues were sold.

During the winter of 1955–56, 21 towns availed of the ‘Exhibition of paintings lent by the Haverty Trust 1955-56’. The first exhibition took place in October in Enniscorthy in the Christian Brothers’ school and the last took place in May in the local vocational school in Tralee.

In return for setting up, dismounting and dispatching the show at a cost borne by the Arts Council, local societies were asked to secure a suitable exhibition hall for about a week, advertise the event and supervise the pictures while on view to the public. James White was also available to give a lecture on the paintings at each centre.

The Council was glad to note that the attendance at all centres was good, amounting to an average of about 300 people, and that the exhibition did a great deal to stimulate interest in the work of Irish painters in places which, up to then, had very little opportunity of having such exhibitions.

Programme: Exhibition of paintings lent by the Haverty Trust 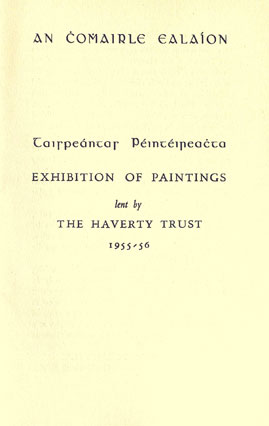 The cover of the catalogue for the Haverty exhibition

The Council has availed of the opportunity of making the Quinquennial Exhibition available not only in Dublin, but to as many centres as possible throughout the country during the 1955-56 season, with a view to giving as many of our people as possible a sense of appreciation of the work of Irish artists …